Into the Forge, Part 1

Weapon concept; one of my favorite things to design.  We have decided that our character will be wielding three separate weapons throughout the game; great sword, shield, and long bow.  It was also decided that since she is just a little girl that the weapons would be the same size as they would be if wielded by a grown man.  So this will add a little bit of comedy into this more serious game.  But at the same time, it will add a greater sense of achievement by the time she reaches the end of the game.  Why?  Because she will struggle to wield these tools at the beginning, but by the end of the game they will be a dangerous extension of her body.

For a lot of my first designs I made wider bases and silhouettes because it gave a more massive feel.  But as things progressed, I started introducing less and less mass, and more detail.  By the end I realized what I was doing; making things really really difficult on us later when we start animating everything.  So I told myself that the next batch of designs would be more feasible.  And lets be honest… more practical as well.

See you next week! 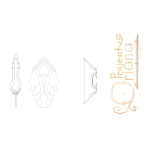