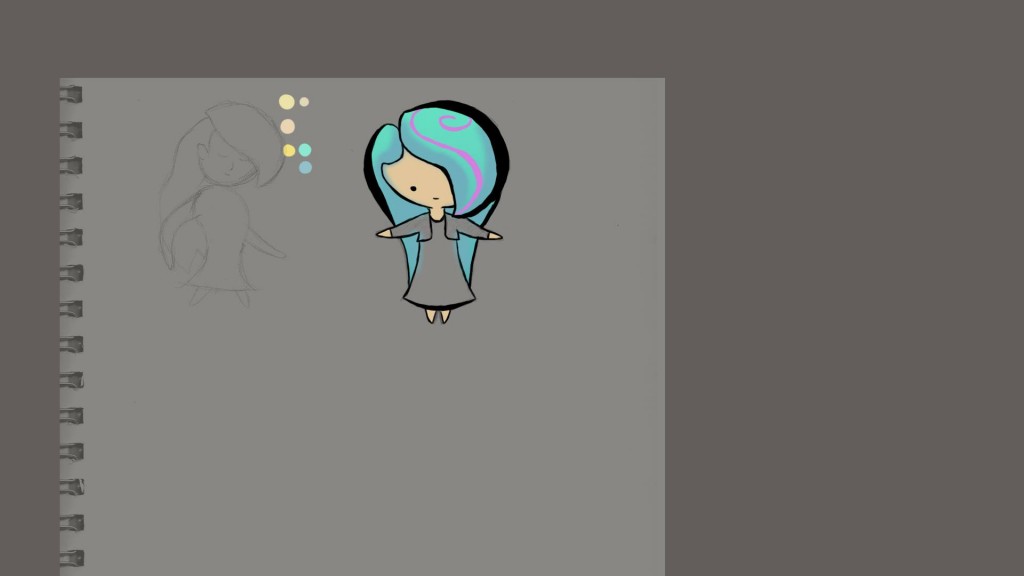 Hi there! As this is my first exposure to the public from this project, I’d like to start out by saying thank you for following along with everything we’ve done and everything we have yet to do! We are all really excited to get this thing moving and appreciate your support.  Now… about this character development.  We wanted to start out with the idea of a little girl with flowing hair, which meant that not only did the hair have to be long, it also needed to be fairly straight.  You might think “that’s pretty elementary.”  You’re right, the hair should be self explanatory.  But to complement the big flowing mass of hair, I figured we should have a dress with a larger, flowing bottom to it.  So now the character isn’t top heavy anymore (at least not as badly).

So with those two things in mind, I started silhouetting, which if you don’t know what that is, it’s where I take a fairly large brush and just make shapes in solid black and try to find interesting shapes in them.  It’s an exploratory drawing exercise that doesn’t take too much time or effort (if you’re doing it right).  So once I finished a full sheet of silhouettes, I not only found a couple of interesting character concepts for Oriana, but I also found a few object and enemy concepts for the game as well.  It is a really helpful tool that I highly recommend to anyone messing around in concept.

Once I had a couple silhouettes I liked for Oriana’s shape, I started working with hair styles and dress types.  The very first design I came up with is the image above.  I covered half of her face with hair because I didn’t want her figure to be completely symmetrical.  It also helped with accent colors to streak along in her hair such as the magenta I threw in the blue hair.  It’s a very whimsical and naive feel with a bit of mystery.

Her head is bigger than her body to exaggerate the idea that she is a young child.  It also brings the idea of super cute to a lot of people.

So there you have it folks.  My first concept image for this game.  Please continue following our work in the months to follow!  We will be putting out a bunch of exciting stuff to look at! 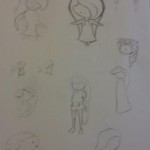