In any character design process, it is imperative that there be a turn around of the character.  It gives every artist on the team a solid feel of the anatomy and design of the character which speeds up production time immensely.  What I have above is the first pass of our main character, Oriana.  Through discussion and collaboration with my team, we came to the conclusion that my previous design wasn’t going to be enough for the level of depth we needed for the game.  Something as tiny and simple as my first design wasn’t going to send people the right message (or at least not connect as well with our audience).  So I added a bit more realism to her form.  Her height is now more believable from a real life child reference even though her head is still much larger than her body.  I kept the larger head because if we had disposed of all exaggeration in her design, we would be limiting what we could put into the game for where we want to go.

We were all pretty excited with how the clothing design worked with animation.  While it’s super simple and long, it gives a lot of flow and tell tale of wind when moving around, which is something we want to tap into heavily.  So at this point in time we have three sources of flow.  The main source being her long black hair which is iconic for her.  The second source being the poncho, which doesn’t have a ton of flow, but is still light and airy.  The third source is her skirt which hugs her legs fairly tightly compared to the looseness of her hair and poncho.  It isn’t going to draw nearly as much tell tale signs of wind and motion as the other two sources.  But you’ll notice the gradation of flow from the top to the bottom which is something I kind of fell in love with from the moment I drew the first sketch of it.

Thanks for keeping up with us and hope to see you again soon! 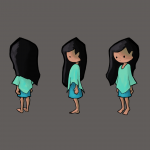